The Lumbussie District Office of the National Commission for Civic Education (NCCE), Upper West Region, in collaboration with Ghana Integrity Initiative (GII) sensitized citizens during a workshop within the district on violent extremism, terrorism and corruption (as mandated by the Commission in Article 233c of the 1992 Constitution).

The programme took place in Hamile at the assembly hall of Holy Family Senior High School on 31st October 2022 at 9:30 am. In attendance were staff of the NCCE, traditional rulers, religious leaders, Ghana Immigration Service and the Ghana Integrity Initiative (GII).

The District Director of NCCE, Mr. Ganvu Paul Kwame, in his welcome address, emphasized that security is a shared responsibility, hence the need for all to be vigilant and collaborate with the security agencies to ensure peaceful coexistence. He also said most of our neighbouring countries have been attacked by terrorists and we need to be alert.

The Programme Officer of the Ghana Integrity Initiative (GII), Mr. Jacob Tetteh Ahuno defined corruption as the abuse of power entrusted to a person or people for public gain. He discussed with the participants the types of corruption which include, petty corruption, grand corruption, embezzlement, extortion, and bribery.

Supt. Owusu Ansah (OIC Hamile Command) explained strategies terrorists usually employ or could employ to attack a nation. He said we should avoid prejudice and discrimination against minority groups such as the Fulani Herdsmen. According to him, this can compel them to join terrorist organizations empowering them to vent their frustration on society through violent extremism and terrorist activities.

supt. Owusu Ansah (OIC Hamile Command) advising the audience to be alert and collaborate with security personnel to fight violent extremism, terrorism and corruption (Mr. Ganvu, the District Director on the left). 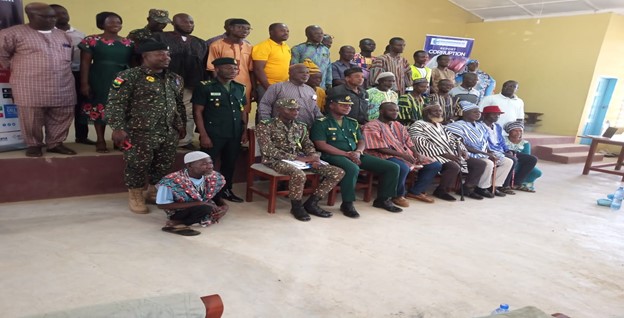 A group picture of all participants 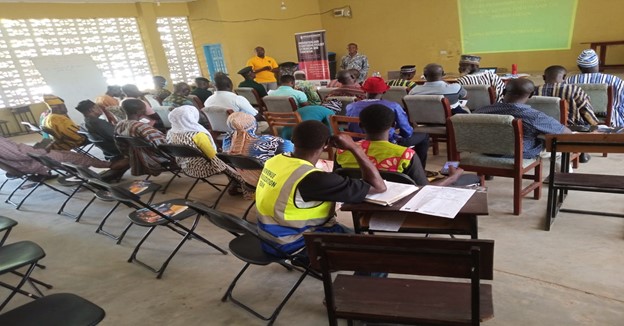 The Programme Officer of the Ghana Integrity Initiative (GII), Mr. Jacob Tetteh Ahuno explaining to the participants, the various types of corruption.

News
Let’s Be Contributors In Combating The Deadly Pandemic
Feb 10, 2022

News
Contestants of Miss Ghana will now be educated on civic...
Jun 4, 2022