The NCCE uses the under listed flagship programmes to educate and sensitise Ghanaians in communities and schools across the country. These include: 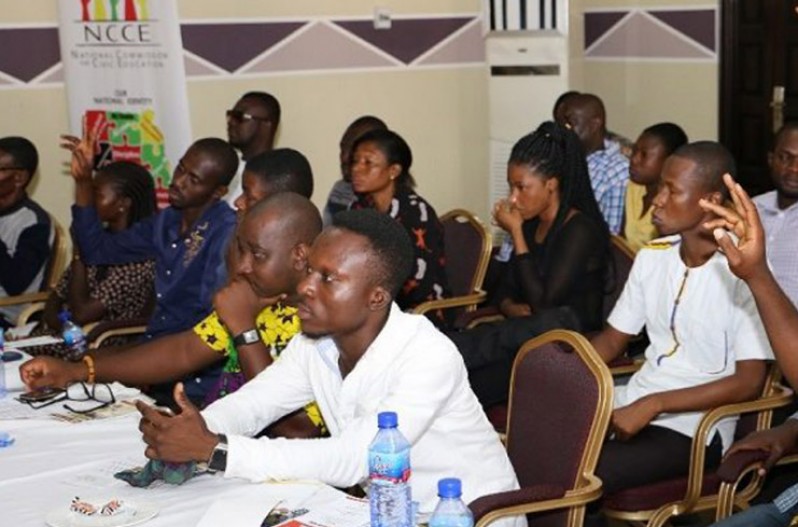 The Annual Democracy Lecture was instituted in 2012 as part of the Commission’s Annual Constitution Week  activities. The lecture offers all Ghanaians the opportunity to reflect on how far the country has fared in her democratic journey, assess pressing challenges and agree on a way forward; in so doing, strengthen our resolve to protect and ensure national stability.  The Annual Democracy Lecture is further aimed at creating in Ghanaians the sense of ownership in our democracy and its processes, thereby serving as a source of motivation to live up to the rights and responsibilities of citizens. 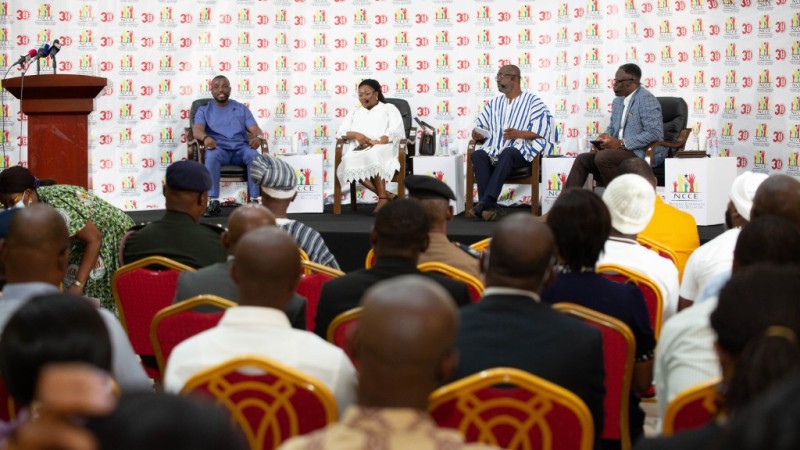 The Annual Constitution Week was instituted on 28th April, 2001 to commemorate the fourth Republic and the date on which the people of Ghana through a referendum accepted the Fourth Republican Constitution. The Week is observed annually from the 28th of April to the 4th of May nationwide with well thought out themes. Each year presents a unique strategy and theme for the celebration. Activities organized during the Week range from lectures, roundtable discussions, debates, quizzes, constitution game competitions, durbars, clean-up campaigns, dramas and media engagements.

The NCCE’s Citizenship Week was instituted in 2012. Annual Citizenship Week presents a platform to remind young Ghanaians of their responsibilities as citizens and the role they can play in building a strong, vibrant and democratic Ghana. During the Citizenship Week, the Commission engages volunteers from the academia, business groups, clergy, professionals, media, women groups, persons in leadership positions and accomplished citizens living in the communities to interact and impart virtues of good citizenship, the need to uphold democratic values and civic responsibilities at basic schools across the country. In 2012, the maiden Citizenship Week was held in two thousand (2,000)  selected schools throughout the country. 2013 witnessed the extension of Citizenship week to 4,000 schools. Annual Citizenship Week is celebrated in all sixteen (16) regions and two hundred and sixty-three (263) offices of the Commission nationwide. As of 2021, the Commission and its resource persons visited seven thousand three hundred and fifty (7,350) basic schools across the country with one million, one hundred and twenty-three thousand, four hundred and seventeen (1,123,417) pupils participating in these engagements nationwide. 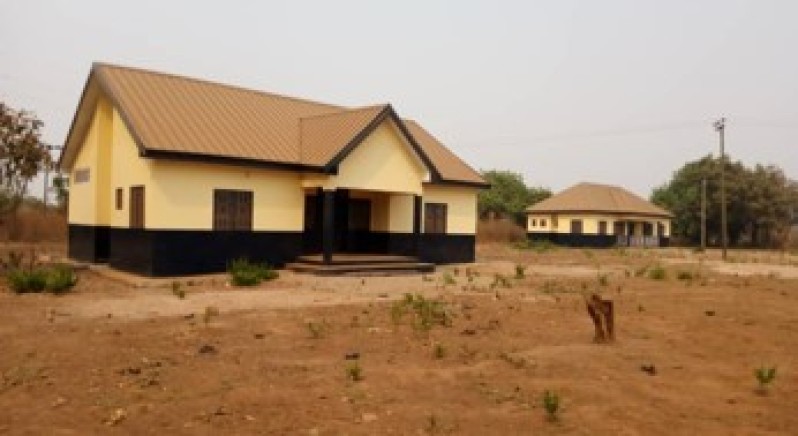 The Social Auditing Programme (SAP) started in 2006 to promote transparency and accountability among public office holders and encourage citizens’ participation in governance.  The concept is an essential element of participatory democracy that empowers the citizenry to demand accountability from duty bearers (both elected and appointed). The Programme offers a platform for public education that enables the public assess the performance of public policies, programmes and projects. This seeks to influence the processes, outcomes and impacts of public policies and actions against the corresponding budgetary allocations for their implementation. Several communities throughout the country have been introduced to the concept of Social Auditing and have benefitted from various social amenities including schools, roads, health centres, police posts, boreholes, and toilets, among others. The NCCE through the SAP won an award from Ghana Integrity Initiative for promoting transparency and social accountability through its civic education programmes and championing the fight against corruption. 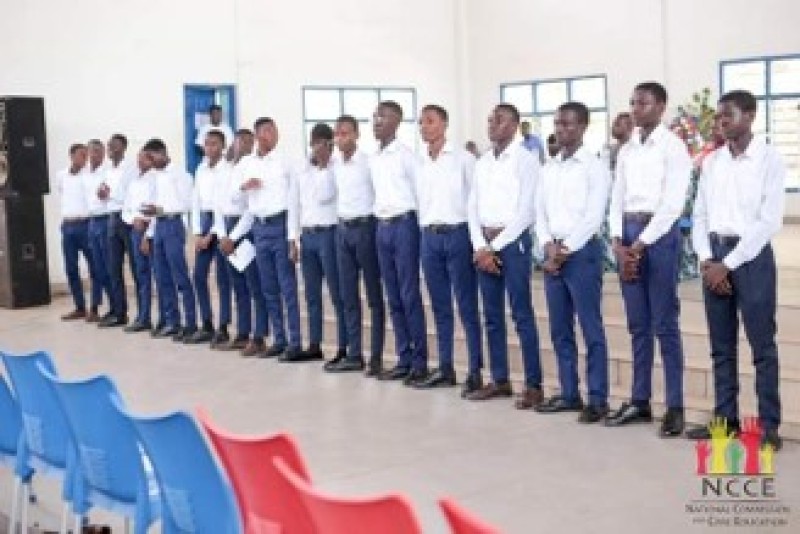 The NCCE’s Civic Education Clubs (CEC) encourages the study of the Constitution to broaden and deepen the understanding of the youth in democracy and nation-building. Students are encouraged to realize their roles as future leaders and to take an active part in consolidating Ghana’s democracy and national stability.

CECs were introduced in 1996 by the Commission. The Commission has over four thousand three hundred and ninety-eight (4,398)  CECs in basic, secondary, and tertiary institutions across the country. CECs engage in activities such as quizzes, debates, mock parliaments, clean-up activities, and excursions among others to broaden their national outlook. 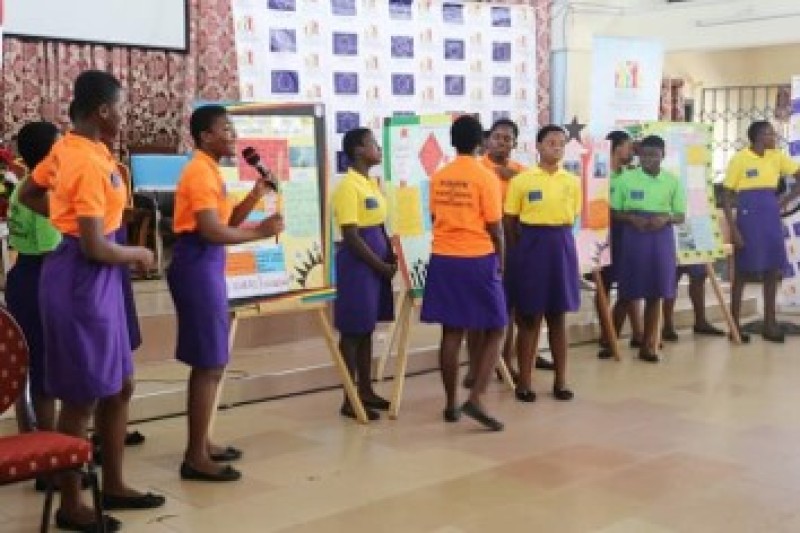 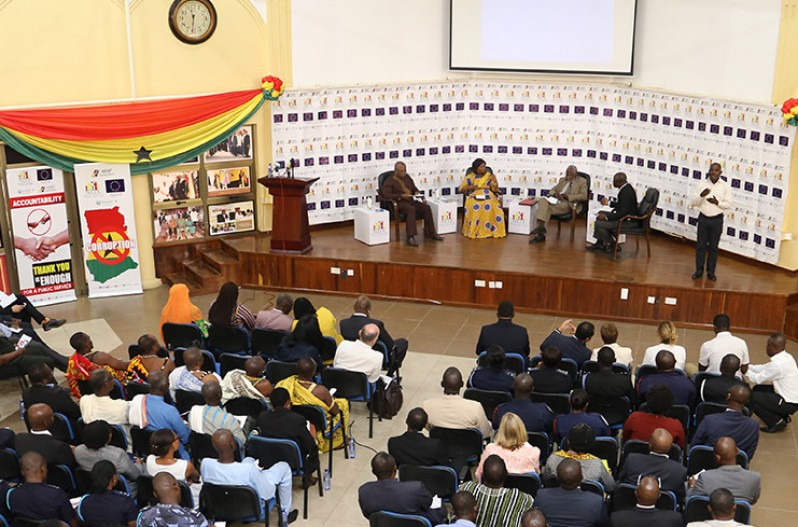 The Commission has over the years created platforms on which critical national issues bordering on sustaining and strengthening Ghana’s democracy are discussed.  The quarterly Dialogue Series was introduced by the Commission in 2014 dubbed “Engage, Educate, Empower”.  It seeks to engage, educate and deepen citizens’ understanding of Ghana’s democratic process to empower Ghanaians to actively participate in governance.  During the Dialogue, the Commission engages resource persons from diverse backgrounds to critically examine pertinent issues and contributions from participants. Additional dialogues have been introduced since its inception such as 8 dialogues on Accountability, Rule of law and Anti-Corruption Programme (ARAP) and 3 on Preventing Electoral Violence and Providing Security to the Border Regions of Ghana (NORPRESEC)’.

So far seventeen dialogues have been held which discussed the following topics:

Beyond the August 29 Verdict Balancing the power between the three Arms of Government- Lessons and the path ahead. Assessing the effectiveness of District Assemblies in Ghana’s Democracy Assessing the effectiveness of Parliament Assessing the effectiveness of the Media Dialogue on Corruption Abuse of Office , Public Accountability Survey report on violent extremism in ten border regions of Ghana Public perception on the state of Corruption, Accountability and Environmental Governance in Ghana Public Opinion on Corruption, Public Accountability and Environmental Governance in Ghana Whistle Blowing Good Environmental Governance and the Coronavirus Pandemic Right to Information Bill Strengthening our democratic institutions was a success Violent Extremism and Political Instability Peace And National Cohesion in The Context of Violent Extremism