Tokor (V/R), Oct 27, GNA - The Reverend Father Oscar W. O. Kuebutornye of Saint Paul’s Senior High School (SPACO) in the Ketu South Municipality, has observed that the current state of affairs in the country seemed to be suggesting “no hope for the future.

He cited the polarisation along political and ethnic lines, political agenda instead of national agenda and the complicity of stakeholders including religious bodies as reasons for the observation.

Rev Kuebutornye who was speaking at an Inter-Party Dialogue Committee (IPDC) meeting at the Ketu South Municipal Conference Hall on national cohesion and inclusive participation in governance, said he feared there was no hope the situation would get better, naming the two major political parties as the culprits.

“The problems of this country are created by the National Democratic Congress (NDC) and the New Patriotic Party (NPP). They create the problems to benefit them. NDC in power will create a problem, we vote them out for NPP to come, they will also create and we vote them out.

It’s such that even if human lives are involved, they don’t care. They don’t mind if someone will have to die for them to make a point.

“The dangerous part is that our institutions such as the religious bodies, education and health sectors and all others have become almost corrupt, thus, we can’t hold our leaders accountable.

If you go to a church for example, they have their members there who find means to influence us to remain silent and not admonish them when they do the wrong.”

He said there was the need for concerted efforts by every Ghanaian to reverse the trend urging people to guard against discrimination and ethnicised politics while strengthening the family unit, quality education and above all, tolerance to other's views to keep the prevailing peace and unity in the country.

Mr George Abizy Baffour, Second-in-Command at the Aflao Division of the National Intelligence Bureau (NIB), drew the attention of the stakeholders to join forces with security operatives to protect the country’s borders to prevent the threat, which the influx of youthful illegal travellers into the country could pose.

He explained that aside the threat of violent extremism, these illegal travellers would bloat the population and compete with the locals for non-existing jobs, citing, the informal sectors especially the construction sector which he said was already preferring other nationals (because of cheap labour) to Ghanaians.

Madam Evelyn Klokpodzi, Ketu South Municipal Director, National Commission for Civic Education (NCCE), said the engagement with the stakeholders had become important, so people would live together in peace so there could be “harmony, tranquility, quietness and love.”

Torgbui Pasaku IV, Dufia of Hatsukope, Chairman for the occasion, pleaded with everyone especially sympathisers of NDC and NPP to commit to peace and be alert to avoid any unfortunate situation in the country calling, “let’s go away with this education and tell others about it.” 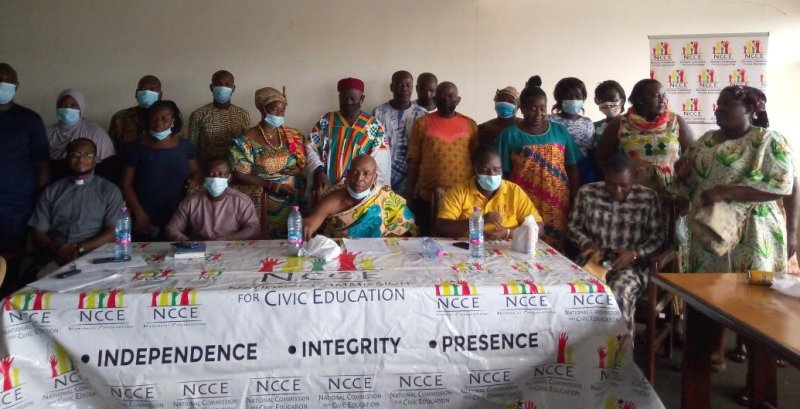 News
MINISTER URGES YOUTH TO TAKE PRIDE OF THEIR DIVERSITY AND...
Apr 7, 2017