The National Commission for Civic Education (NCCE) has stressed the need to strengthen the collaboration between Editors and the Commission to advance pertinent issues of nation-building.

The Deputy Chairman, Finance and Administration, Ms. Kathleen Addy, who expressed her belief in cooperation, noted that there is more to derive from an NCCE, Editors alliance to strengthen our democracy and enhance our social development.

She made the remarks during an NCCE/EU ARAP evening Encounter with Editors in Accra, which was on the theme: “Enhancing Citizens’ Participation and Accountability in Governance Beyond Elections: Role of the Media”.

To enhance media effective function in Ghana’s democracy, Ms. Addy called for the firming up of the Editors Forum to be the voice of reason to help the National Media Commission address the media excesses.

Professor Kwame Karikari, Board Chairman of the Graphic Communication Group Ltd and Resource Person at the Encounter, noted that the media has a vital role in sustaining participatory democracy.

He expressed the need for the media to set the agenda on the pertinent issues of national importance to the voter and how they have prepared the citizenry for the elections.

Prof. Karikari observed that the most critical structure of governance that citizen participation could be leverage is the local government and encouraged the media to focus more attention on what citizens do there to demand accountability.

The Deputy Chairman, Operations, Mr. Samuel Asare Akuamoah, stated the objective of the Commission to engage the editors on the need to encourage citizen participation in the democratic processes beyond the elections.

He urged them to set the agenda that would promote greater accountability and enhance citizen’s participation in the decision-making process as well as ensure that the voices of the voiceless are amplified in the governance process.

As part of the programme, Mr. Akuamoah on behalf of the Commission presented awards to Mr. Francis Ameyibor of the Ghana News Agency, Mr. Kobby Ashmah, Editor of the Daily Graphic and Mr. Samson Lardy Anyenini, Legal Practitioner and Host of NewsFile on Joy FM, for their contributions to civic education in the country.

On the awardees, Mr. Anyenini thanked the NCCE for the recognition and pledged their commitment to continue partnering with the Commission to deliver civic education to Ghanaians.

The evening Encounter with Editors was part of the Media Advocacy engagements programme by the NCCE with support from the European Union (EU). The programme was under the Accountability, Rule of Law, and Anti-Corruption Programme (ARAP), with the objective among other things to enhance citizens’ active participation in governance.

Essentially the programme aimed at harnessing the gatekeeping role of Editors as key players in the public space to empower the citizenry and encourage them to participate not only during elections but to actively be involved in the governance processes beyond elections. 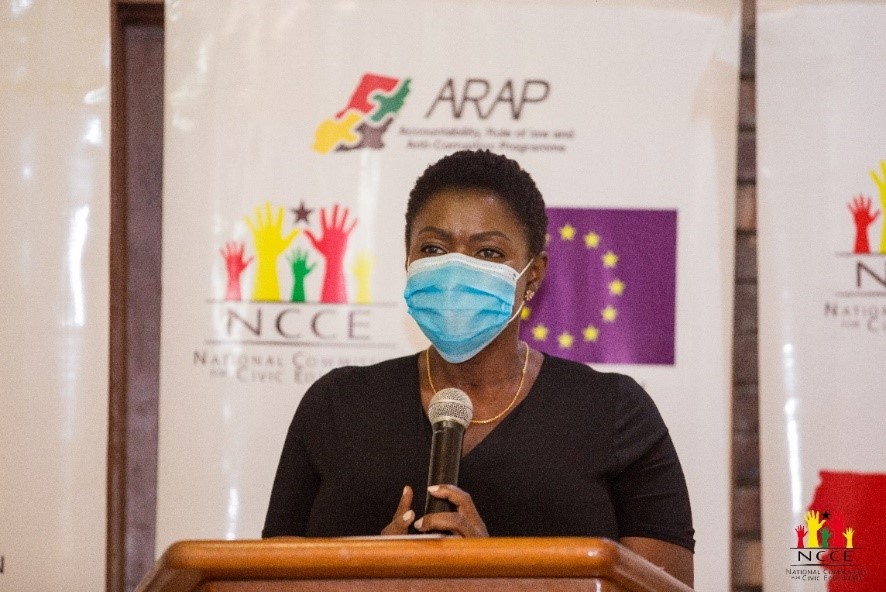 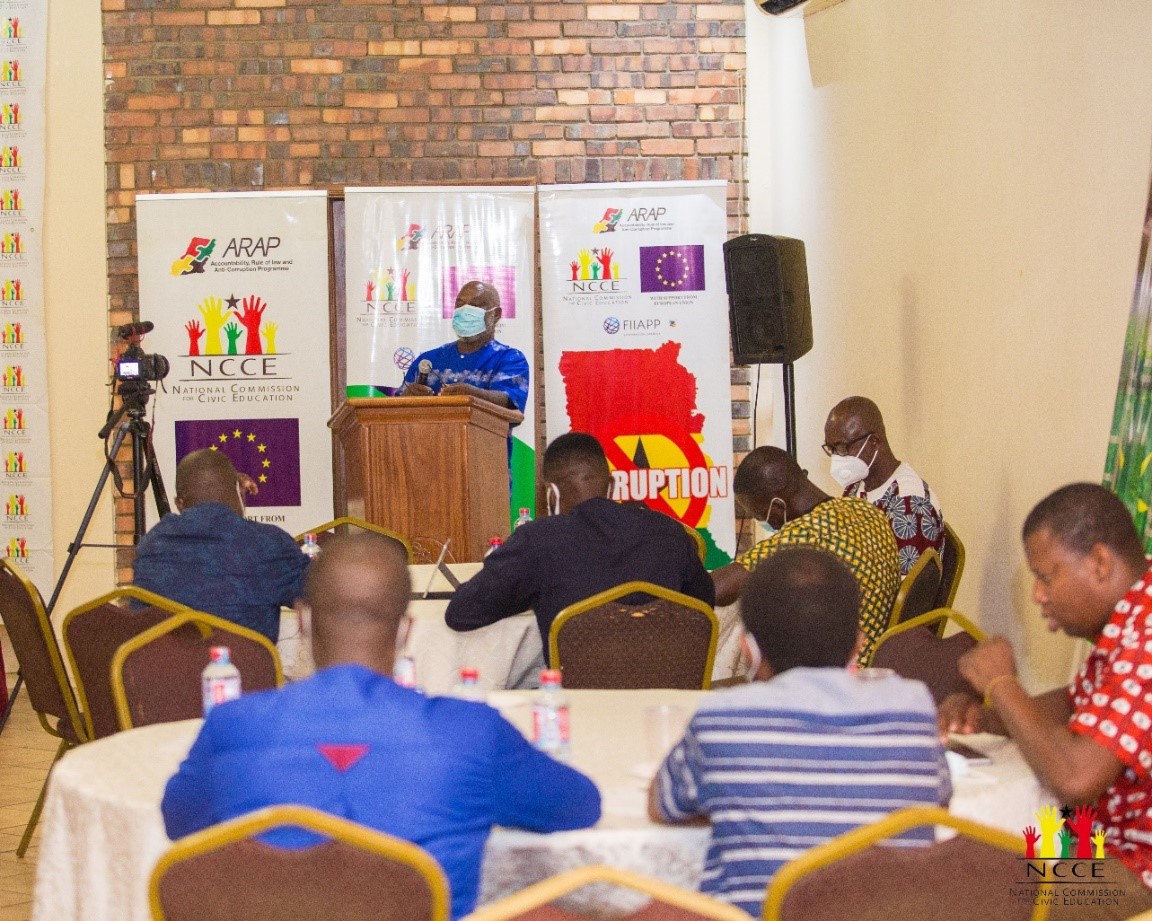 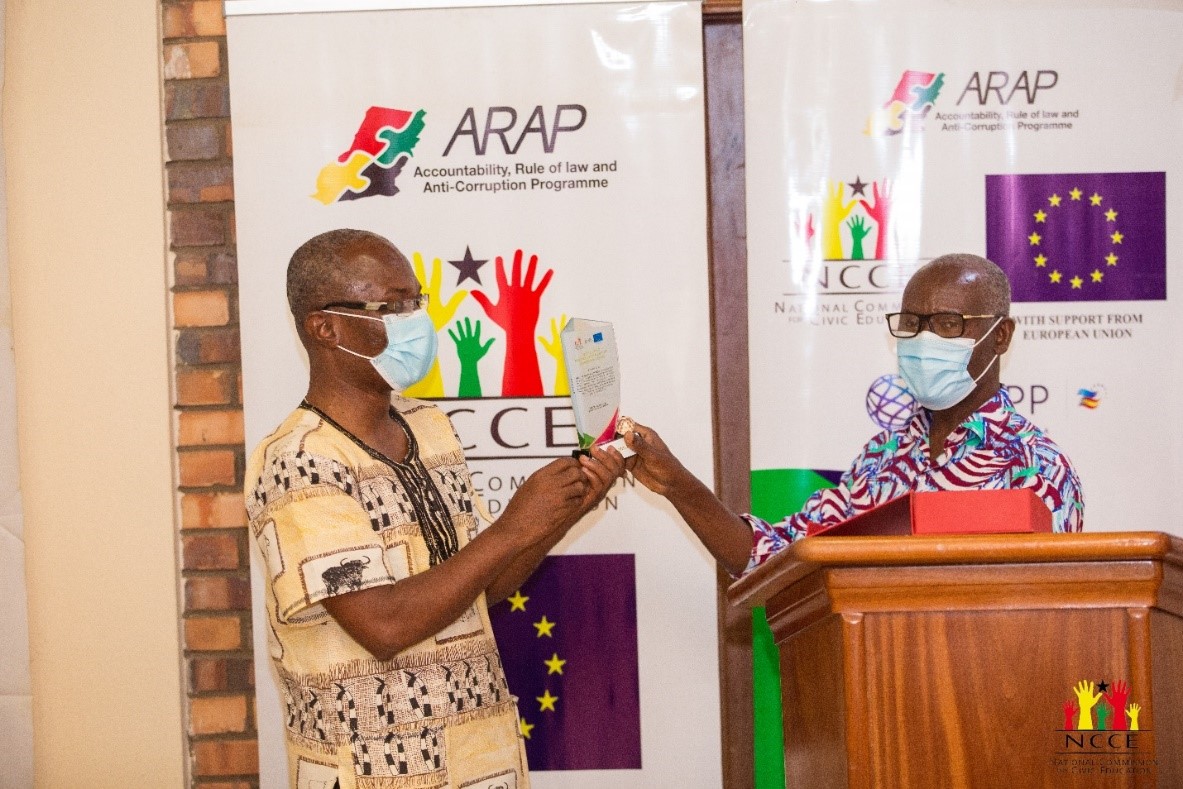 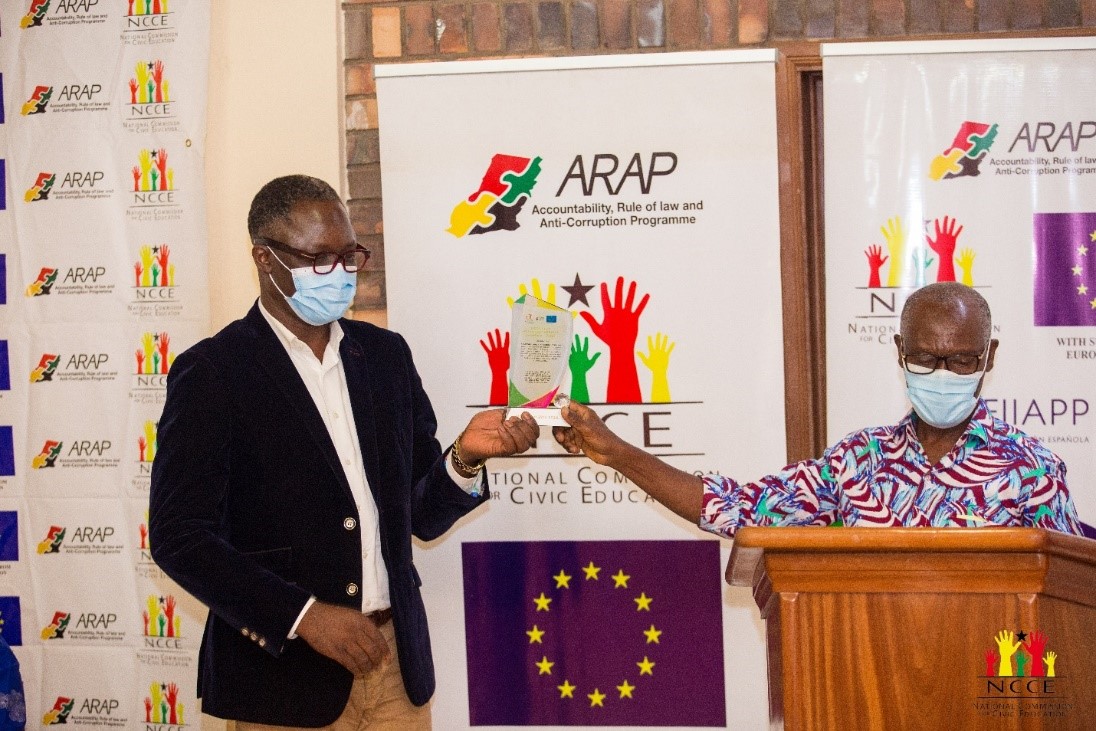 Mr. Asare Akuamoah presenting an award to Mr Anyenini at the event. 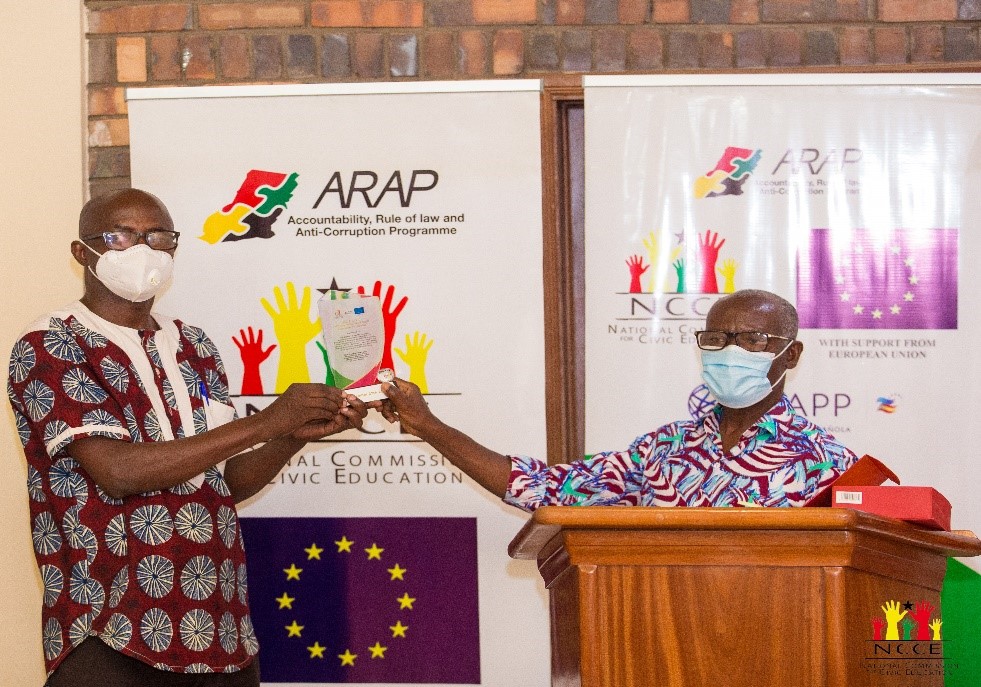 News
NCCE Shows Appreciation To The Church Of Pentecost
Apr 8, 2021