Members of political parties and religious leaders were present The National Commission for Civic Education (NCCE), Kwahu East District has discharged its duty to educate various political party representatives, religious, traditional leaders, and democratic stakeholders in the district on the need to prevent and counter-violence and political vigilantism in Ghana political system to promote peace during the election as its violation is liable to conviction.

The programme which was dubbed “Preventing Electoral Violent And Providing Security to the Northern Border Regions of Ghana (NORPREVSEC)”, was held at the Kwahu East District Assembly Hall on November 5, 2021.

Eastern Regional Director of NCCE, Mr Alex Sackey who addressed the gathering on the position of the NCCE on Peace and Security, pointed out that, political vigilantism and instability in Ghana is due to inter-party rivalry among the various political parties.

Mr Sackey added that uneven distribution of national resources has contributed to political upheaval in most parts of the country. He narrated that, citizens who feel neglected by the government, therefore, become aggrieved hence are easily influenced by terrorists and vigilant groups. He entreated the party representatives to help identify areas underdeveloped for authorities to address resources deficiency in these abandoned localities.

“It is impossible to satisfy everybody, but it is important that the larger majority must be satisfied to avert any form of dissatisfaction in resource allocation,” he said. He also said, most party supporters become reluctant and unconcern about the administration of the state once their party lose in an election as he cautioned against this act.

Talking about security, Mr. Sackey urged the representatives to be conscious of their own security.

Kwahu East District Police Commander, DSP Paul K. Aboagye, who spoke on national security strategy and framework for preventing and countering violent extremism and terrorism in Ghana and the Public Order ACT, 491 noted that terrorist attack is on the rise in Ghana’s neighbouring countries as the country stands a risk of experiencing such attacks if security measures are not enforced at the border towns.

DSP Aboagye mentioned that, victims of political violets from other Africa countries have fled into the country to seek refuge. He attributed some of the theft cases in the country to these refugees who have settled in some parts of the country. “Ghana we will not forget Liberia. When they fall in Ghana, that is where we are going to experience violent crimes since they fled from their countries without taking any property along. They look for lands that are fertile and they attack. They can rob individuals and groups” he explained.

In order to eschew this attack, he stated among other preventive measures that need to be adhered to by individuals and a country as a whole. “Some peculiar ways we can prevent this is self-discipline and rule of law”, he epitomized.

DSP Aboagye noted that, when people in authority execute their duties as expected their subordinates will not revolt against them. NCCE Principal Civic Education Officer of Kwahu East District, Mr Joseph Owusu Koranteng in a related submission, detailed the gathering on ACT 999 that specifies vigilantism and related offenses, saying that, the crime is punishable by law.

Mr. Koranteng then advised representatives on the ACT, stating that, individuals must desist from aiding and abetting activities of political vigilantism in order to evade any form of sanction. “Persons shall not directly or indirectly instigate or command, counsel, procure or solicit in any other manner, whether by a personal act, presence or otherwise, an activity of vigilant,” he added.

He ended that, persons involved in political vigilantism will be expelled from contesting in a public election or holding public or holding party office and will also serve a prison term from ten to fifteen years. “A person who contravenes the ACT, or commits an offence is liable to a term of imprisonment of not less than ten years and not more than fifteen years,” he detailed.

The various political parties in attendant signed a pledge to commit to ensuring peace during and after the election. They also took an undertaking to insight into their supporters to abide by electoral rules to avoid all other forms of mayhem during an election.

The parties present at the meeting are National Democratic Congress, New Patriotic Party and Convention Peoples party as well as Religious and Traditional leaders. 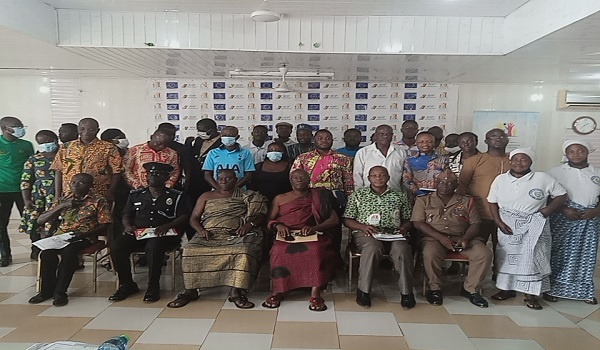 News
THE NCCE SENSITIZES CITIZENS ON THE RIGHT TO INFORMATION ACT...
Nov 28, 2022