CHILD LABOUR IS CRUEL: LET’S ACT NOW TO END IT

Protection of children from harmful work is paramount to every society. The National Commission for Civic Education (NCCE) in observing the International Day Against the Worst Forms of Child Labour, continues to show support to efforts to eliminate the worst forms of child labour in Ghana and the world at large.

The incidence of Child Labour in the world today is estimated by the International Labour Organisation (ILO) to involve 152 million children between ages 5-17 is repugnant. Indeed, the fact that almost half of the victims, 72 million are into hazardous child labour casts a slur on our dignity. Interestingly, progress made against child labour in Africa appears to be slow.

A recent global estimate of Child Labour suggests that 72.1 million African Children are in child labour with 31.5 million doing hazardous work. Similarly, Ghana’s Labour Standard Survey also posts that some 1.9 million children, mostly between the ages of 5- 17 were engaged in child labour.

The NCCE notes that childhood is a wonderful period, where children are supposed to enjoy the care, love and affection of their parents, guardians, caregivers as well as the entire society. However, it is unfortunate that the challenge of child labour still lurks around. It is invigorating that the theme for this year’s celebration: “Take Stock, Honour our Pledge, STOP Child Labour in Ghana Now!” is a clarion call for stakeholders and partners everywhere to act expeditiously to save our children.

As the first World Day since the universal ratification of the ILO’s Convention No. 182 on the Worst Forms of Child Labour, which takes place at a time the COVID-19 crisis threatens to reverse years of progress; the NCCE believes efforts to eliminate Child Labour should elicit more cogent support from everyone. The news that the ILO and UNICEF will release new global estimates and trends on child labour (2016-2020), under the aegis of Alliance 8.7 is refreshing, as it will guide our efforts in the fight by eliciting commitment to the 2021 Action Pledges to end Child labour.

Moreover, with four years to achieving SDG target 8.7 set to end child labour by 2025, the Action Pledges in this year’s World Day, would contribute to another milestone for the 2022 Global Conference on Child Labour, scheduled for South Africa.

The NCCE re-echoes provisions of Article 15 (1) of the African Charter on the Rights and Welfare of the Child, and Article 28 (2) of the 1992 Constitution that “Every child has the right to be protected from engaging in work that constitutes a threat to his health, education or development.” Under no circumstance should children be engaged in any hazardous work. The NCCE appeals to parents and people of goodwill to work together to protect and promote greater care for our children by stepping up their commitment to eliminating the worse forms of child labour. Child Labour is cruel and the way to build a healthy nation is to stop child exploitation and start child care.

NCCE pledges to STOP Child Labour. Let’s Work together to end this canker. 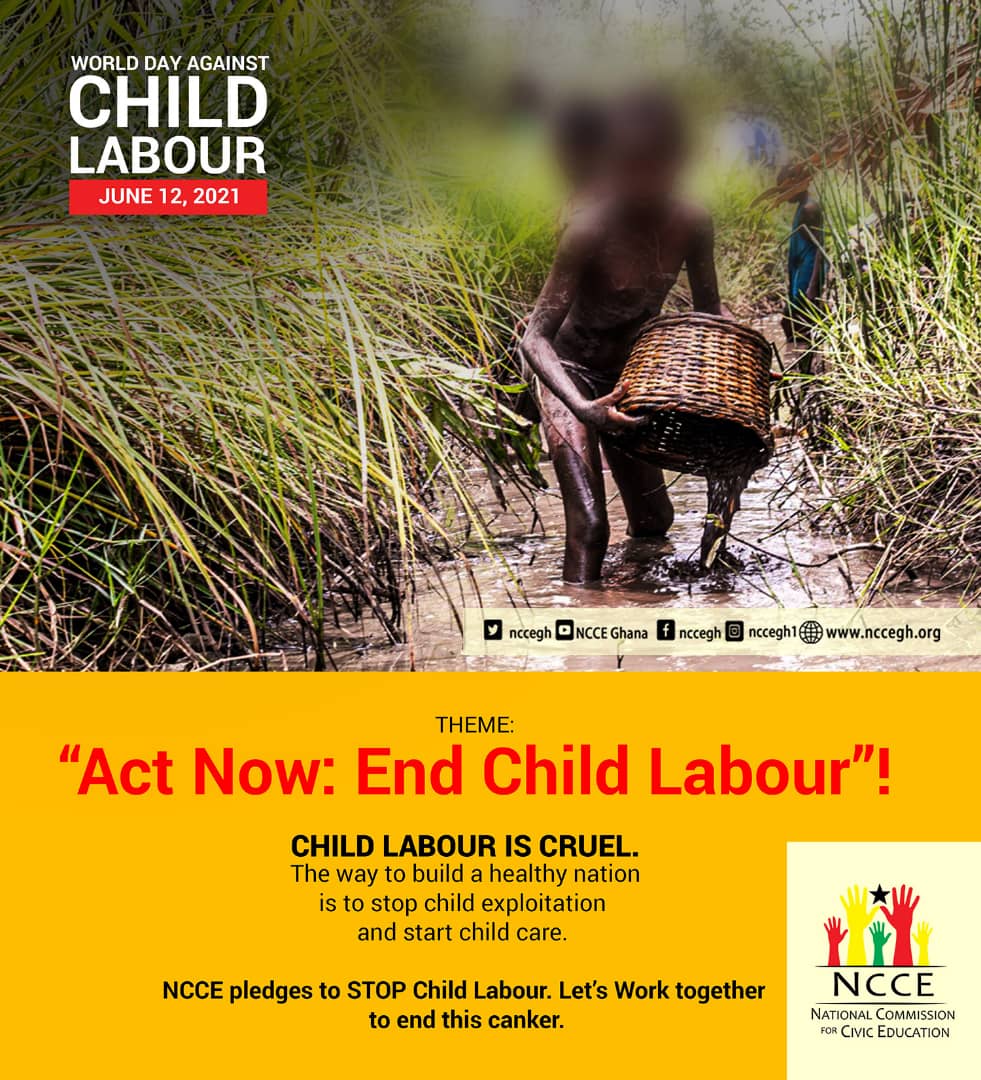