Tema, May 5, GNA - The Tema West Municipal Office of the National Commission for Civic Education (NCCE) has engaged traders and nursing mothers on the need to uphold the tenets of the 1992 Constitution of Ghana.

The engagement with traders at the Community Two market and the nursing mothers at the Klagon CHPS Compound formed part of nationwide activities to ensure that Ghanaians were imbued with the faith and culture of constitutionalism as the bastion of democracy.

The 2021 annual National Constitution Week celebration is on the general theme: “We are One, Ghana First,” which seeks to emphasize the need for every Ghanaian to put Ghana First, rally around the Constitution,and defend it at all times.

The Municipal Director, Mr. Fidel Nii-Akuffo Bortey, in an address at separate locations, admonished the traders and nursing mothers too, at all times, uphold the Constitution as it had guaranteed the country’s freedoms and liberated it for the past 29 years and counting.

He encouraged them to live in harmony with others and help build the nation by performing their duties as citizens as enshrined in Article 41 of the Constitution.

He took the opportunity to educate them on the observance of the COVID-19 preventive protocols and avail themselves of the vaccination when vaccines were made available for rollout.

He mentioned the payment of taxes, keeping surroundings clean, respecting national symbols, and promoting national unity, as part of the duties and responsibilities expected of citizens. 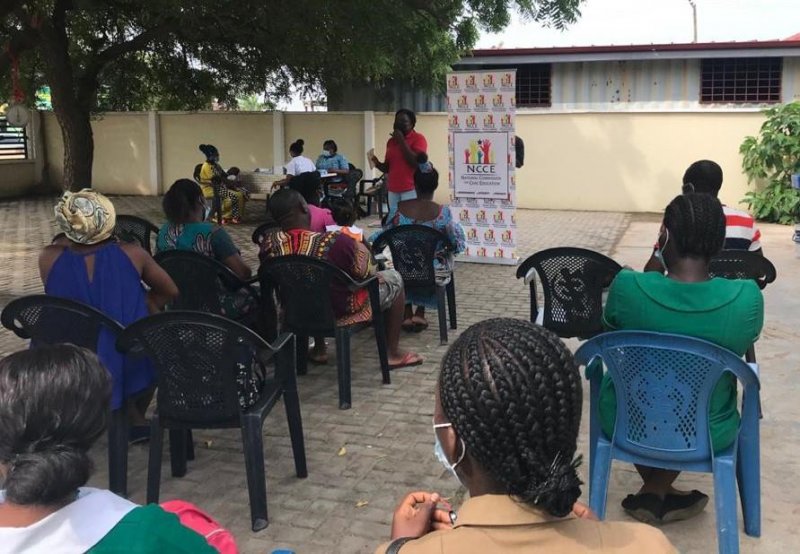 Mr. Bortey emphasized the pillars upon which the nation was built which included the respect for human rights, freedom, justice, probity, and accountability, respect for rule of law, among others as stipulated in the preamble of the constitution.

He said activities for this year’s celebration would continue with further engagements with GNTDA Community Two Branch, Texpo Market, and other general outdoor sensitization exercises.

Mr. Edward Sam Aryee and Ms. Enyonam Gagakumah, both staff of the Municipal Office of the NCCE, took turns to encourage the market women to get copies of the Constitution for themselves and their children.
Source: GNA

News
GIRLS URGED TO BE DISCIPLINED TO SUCCEED
Oct 10, 2019